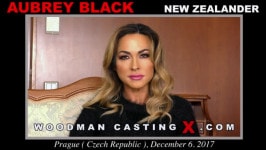 Join to vote for
Aubrey Black
Join to add to
Favourites

"Australia's favorite MILF" Aubrey Black is a fit, curvy brunette with a fetish for filming herself in sexy action. With a dozen AAIA Award nominations to her name, as well as features in Covery Girl, Centre Fold, and Calendar Girl, Aubrey is a mainstream model with a pornstar's naughty streak. A former competitive athlete, Aubrey fell in love with the camera at an early age, and would put more effort into performing for the viewers at home than winning her games. Making the move to modeling was a labor of love, and with Aubrey's 36E tits and big ass, it was a match made in heaven. Claiming to be "a good girl with a bad girl streak waiting to be unleashed," as soon as the red light flashes, Aubrey's wild side gets unleashed, and this Aussie cougar with a strong, but ultra-feminine body shows why she was meant to be an on-screen star!

As far as we know she began her nude modeling career in 2017. Aubrey Black has 35 covers, 3 photosets and 32 videos to her name.