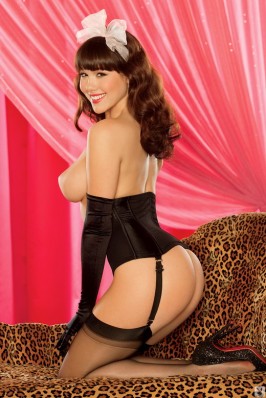 Join to vote for
Claire Sinclair
Join to add to
Favourites

Return to form with the inimitable Claire Sinclair, Miss October 2010 and Playmate of the Year 2011. She’s a classic pin-up in the time-honored tradition of Bettie Page – brown hair done up in rollers, cherry-red lips, a narrow waist and and an ample (and God-given) bust. She was working as a lingerie model when she was invited to visit the home of her father’s favorite painter, Olivia De Berardinis – who is, as it so happens, a monthly contributor to Playboy magazine. Claire dressed in her 50’s best, and sure enough, Olivia asked her to pose for a painting – and later, she asked Claire if she wanted to go to the Mansion and meet Hugh Hefner. “He asked for my name and number,” she says, “and later, he called me to test for Playmate.” The rest, as they say, is history – and in another snap of the garter, Claire was named Playmate of the Year and honored with a tribute at the Palms.

“I never thought I would be Playmate of the Month, let alone the Year,” she says, still reeling. “Most of the other girls are tall and blonde. I’m cut from a different kind of cloth.” If we know Claire, it’s a zag-cut piece of atomic-print bark cloth – she loves all things vintage, from clothes and shoes to furniture, and she’d rather turn her stomach over some John Waters than chin up for dinner and a movie. She got into burlesque dancing with a guest spot in the Crazy Horse Vegas revue, and this year she’s headlining a show at the Stratosphere Hotel. Big doings for such a young girl – Claire was eighteen when she shot her Centerfold, and she became Playmate of the Year just shy of her twentieth birthday. “What I really want is a cover feature,” she says. “The ads in Playboy are all liquor and cigars, and those companies won’t place ads in a magazine with an underage girl on the cover, so my last two covers were rejected. I just turned 21, so maybe the third time will be the charm.” Cover or no cover, we know one thing for sure – there’s no one quite like Miss Sinclair.

As far as we know she began her nude modeling career in 2010. Claire Sinclair has 8 covers, 8 photosets to her name.

She's know as: Claire Sinclair and has modeled for these premium nude girl sites: PLAYBOY PLUS.