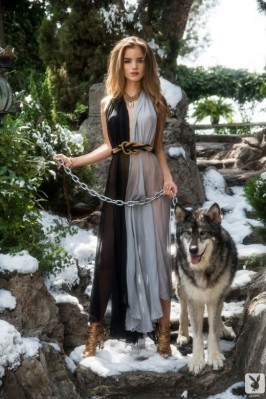 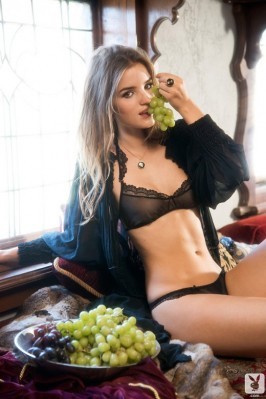 Join to vote for
Roos van Mon...
Join to add to
Favourites

A rose is a rose with our 60th Anniversary Playmate Roos van Montfort. She’s tall – 5’ 9½”, if you want to know – with tawny-brown hair, brown eyes, and a certain European je ne sais quoi. Born in Geldrop, a small town in the southern Netherlands – more famous for Lord of the Rings tourism than for fashion models, really – Roos got her feet wet at 20 with a big modeling contract in London. “Growing up in the Netherlands was calm and peaceful,” she says, in a slight but charming Dutch accent. “I always knew that I was different. I wanted to see the world.” Now in New York City, and hot on the trail of her truly memorable Centerfold, she’s got her sights set on California – and with the face, body and personality of a Hollywood starlet, we’re sure that it won’t be a problem. “There’s always something going on in New York,” she says. “I wake up in the morning and think, “Oh my God, I love this place” – but now that I’m a Playmate, I want something more.” So how is Miss van Montfort adjusting to her glamorous Playmate status? “Being a Playmate is the coolest thing I’ve done in my modeling career,” she says. “It’s a little part of history – after all, there will only be one Miss January 2014.” Right you are, Roos. Selecting the 60th Anniversary Playmate wasn’t easy, but we were delighted with the beautiful Miss van Montfort, and more than ready to let her lead us into the New Year. “My last name makes me sound like royalty,” she says, laughing. “Now I just have to find my prince!” A Playmate by any other name, one thing is for sure – Roos van Montfort is definitely here to stay.

As far as we know she began her nude modeling career in 2014. Roos van Montfort has 12 covers, 12 photosets to her name.

She's know as: Roos van Montfort and has modeled for these premium nude girl sites: PLAYBOY PLUS.