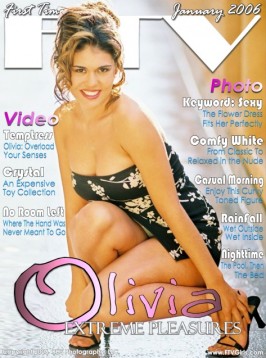 Join to vote for
Olivia
Join to add to
Favourites

Olivia Olovely is a voluptuous Latina with an ass that won't quit. Her beautiful booty is a thick and juicy natural wonder, and her big fake tits are works of art. Olivia gets her looks from her unique heritage, a motley mixture of French, German, Spanish, Chilean, and Sicilian. She first got her start in the industry in 1995, spending seven years working as a stripper, oil wrestler, and even a foxy boxer! From there, it was a natural transition to softcore modeling, and finally, in August of 2002, she made the leap into hardcore porn. Since then, she's filmed more than 300 sexy scenes, been inducted into the Urban X Hall of Fame, and earned herself 3 AVN Award nominations! Olivia prides herself on being a passionate performer, and her natural love of fucking shows in every scene she films.

As far as we know she began her nude modeling career in 2002. Olivia has 9 covers, 1 photosets and 8 videos to her name.